Dipu Ruparelia swept all his opponents with a landslide win   in the elections held at Kati-Kati Lugogo to become the fifth president of the Federation of Motorsport Clubs of Uganda (FMU).

Dipu thanked voters for the trust and promised not to let them down. “There has been a lot of mudsling said, but we are here to clean the sport,” Dipu stated in his acceptance speech after chairman of electoral committee Fred Obbo declared him winner.

“Our first move will be to consult the stake holders and before we come up with our strategic plan,” he added.

The Federation of motorsport clubs of Uganda (FMU) and the electoral commision has burried their hutchet confirming saturdayFebuary 1,2020 as date for the election of new office bearers.

“We have agreed we go on with elections and members has to vote. Electoral commision had just assumed powers which is not theirs,” UMOSPOC vice president Justin Mungoma noted. 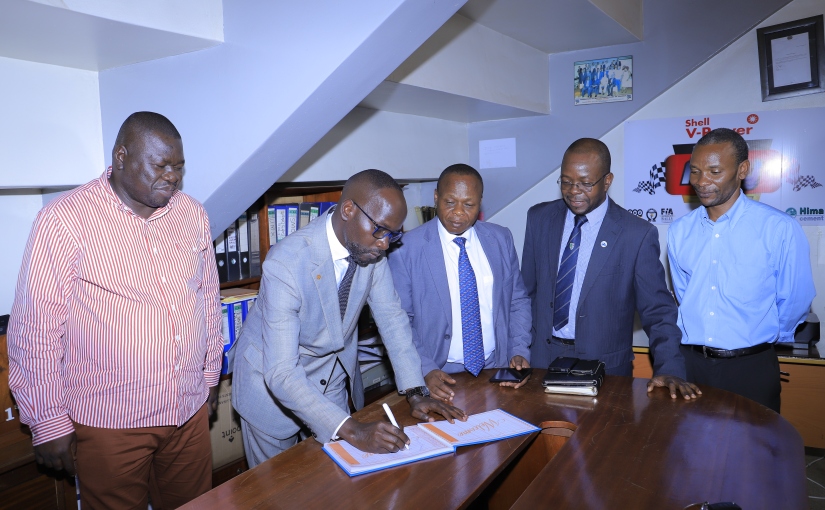 He promised to dedicate his time and support them get more partners on board to sponsor their activities.

It will be fireworks as rally drivers hunt for maximum points in the Clubman Rally Championship, 2WD and Sprint Championships respectively during the FMU Sprint on Sunday at Festino Cite on January26,2020.

The event supported by Coca-cola is the season opener and this year the drivers in CRC ,2WD and Sprint championships will battle out in 10 events.

National Council of Sports (NCS) chairman Bosco Onyik has lauded NSSF for being one of the Organisations that has stood out to support Sports.

“I have attended this function because USPA is very active, but I want to thank NSSF for the contributions they extend to sports and other organisations should emulate them,” Onyik noted.

He also warned Federations heads who cannot meet 75percent of their budget to quit office and hand it to government.

“We have got guideline on how to fund federations but they are not active. Why should a federation draw a budget of sh10bn yet they have contributed nothing.” Onyik stated.

“This is not going to work. I’m happy that NSSF is working with USPA and this is what we want,” Onyik added.

The minors were not crowned during the previous Nile Special USPA annual Galas because of the USPA and Nile Special policy of not associating children below 18years with Alcohol.

Notable among those that were crowned are motocross stars Aviv Orland and his sibling Stav Orland, Kirabo Namutebi and Tracy Naluwooza.

“We believe in the future of Ugandan sport and we hope going forward to invest more. We think our sportsmen and women deserve the support so that when they retire they do it comfortably. The career of a sports personality is limited. The question is have you prepared yourself to retire comfortably, “asked Karamagi.

USPA president Patrick Kanyomozi hailed NSSF for coming on board to sponsor these awards while Hadijah  Namanda, Uganda volleyball federation who represented the parents of these athletes advised them to always work harder if they to achieve more in life.

The third –edition of the minors’ award will take place at Imperial Royale Hotel in Kampala and NSSF MD is expected to preside over the ceremony.

The minors were not crowned during the previous Nile Special USPA annual Gala because of the USPA and Nile Special policy of not associating children below 18years with Alcohol.

“We are set everything is in place. We are grateful with NSSF coming on board to support our initiative to motivate the young talents,” USPA President Patrick Kanyomozi said.

Notable among those to be crowned are motocross stars Aviv Orland and his sibling Stav Orland who were the best during the FIM Africa Motocross Championship in 2016 and 2018 respectively.

The others are swimmer Kirabo Namutebi.

1.Stav Orland-Motocross rider of the year

2.Ambala Atuhaire-Male swimmer of the year

3.Kirabo Namutebi-Female swimmer of the year

Legislator Samuel Odonga Otto, may be super in politics which explains his long stay in Parliament, but needs some classes to match the pool boys on the table.

The Member of Parliament for Aruu County Constituency in Pader District, in the Northern Region of that county was on Saturday beaten 4-1 in the round of 64 of the New Year’s Kampala Open Pool tournament.

Otto put up a spirited fight but he could not manage the charged Vicent Ssekibule who is targeting the sh2m cash prize for the winner.

After the game Otto said, “He was lucky, I just made a few mistakes and he took the day but I could have beaten him.”

The 43-year-old, is a true a sportsman who sacrifices his time to interact with the youth even late in the night at sports events which explains why he has represented his constituency since 2001.

In the players who were eliminated Sula Matovu beat Yuda Ssembuusi while Ssejenmba aka Mayweather was beaten by ceasor Chandiga,

In the ladies’ category, Lydia Ayebazibwe, Rhoda Nakaweesi and Justin Nampebwa were all eliminated.

Action continues today with the Quarters and finals in the men and Ladies’ categories respectively.